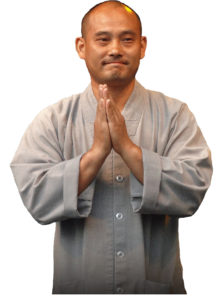 Master Shi Guo Song is the 34th generation Shaolin Monk from the Shaolin Temple of Songshan Mountain in the Henan province of China. He established Shaolin Luohan Temple in Canada in hopes of improving the physical and mental well being of one’s health through sharing the skills, knowledge, and culture embodied in the Shaolin spirit. The Shaolin Luohan Temple also believes in offering an inclusive and safe environment that welcomes all races, gender, and age.

Within Master Shi Guo Song’s 14 years in Canada, he has already trained over one thousand students, with many participating in community events and programs over the past few years. Our students have also taken part in a variety of Canadian Kung Fu Championships, as well the International Competitions offered in America each year returning with over 30 awards each time from various categories in hand and weapon forms.

In 2014, 35 students from the Markham, Toronto, and Montreal schools travelled to Zhengzhou, China to compete in the 10th International Shaolin Wushu Festival, which attracted over 1870 athletes from over 63 countries. Our students excelled in their performances and were able to bring home over 60 medals back to Canada.

Again in 2016, 9 of our students from the Markham school travelled to Zhengzhou, China to compete in the 11th International Shaolin Wushu Festival. Competing against 1500 other athletes, our students were able to secure over 30 medals for Canada.

In 2018, we had 51 students compete at the 13th Hong Kong International Wushu Competition that hosted over 2000 athletes. Our team brought home over 130 medals, including the overall Best Sports Team Award. We want to also congratulate five of our students for winning the Best Athlete Award. We are also very proud of one student for securing 5th place in Group B Men’s All-Rounded Performance, and one of our three-year-old students for winning the Kung Fu Wonder Kid Award.

Since our establishment in 2007, Master Shi Guo Song alongside his disciples and students have always valued giving back to the community through offering volunteer services in coaching Qi Gong, stretching and meditation exercises to the elderly and those with an illness.

*** To learn more about each STQI branch school, please visit their respected sites for further details. ***